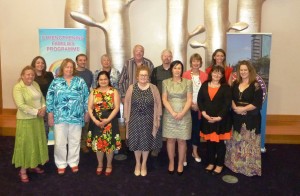 A national Strengthening Families Programme information website for agencies and families in Ireland has been launched by the National SFP Council of Ireland (NSFPCI).

NSFPCI is an inter-regional, nationally representative voluntary body of SFP managers and trainers from across the island of Ireland. Established in 2012 following a national SFP conference, hosted by Ballymun Local Drugs & Alcohol Task Force, Council members are committed to supporting the development of SFP across the country via trainings; research and evaluation; advocacy and information exchange.

The Strengthening Families Programme is an evidence based 14-week family skills programme implemented in communities with interagency support. More than 20 counties are involved in rolling out SFP, for families with teenagers and /or children. Speaking at the launch, Joan Bolger, Vice Chair of the NSFPCI, said “we know from local, national and international evidence, that this programme works for families, and the model of interagency implementation builds positive community relationships”. She further acknowledged Ballymun Local Drugs & Alcohol Task Force for its administrative and financial support, noting that SFP’s across the country operated “without mainstream funding” and called on the government to “support this evidence based programme at a national level”.

Evidence from Ireland consistently shows many improvements in family functioning and parental skills. An analysis of 327 teenagers (aged 12-17 years) who took part in the programme nationally, between 2008 and 2014, showed equal benefits for teen boys and girls, except in parental supervision & overt aggression, where boys benefitted more than girls. Additionally, a Ballymun 7 year follow up study conducted by an independent researcher, found long term benefits for “improved communication and relationships between parents and teenagers, improved parenting skills and teenagers social skills…” and has created “stronger families with less conflict”. The programme was also found to have had additional benefits including increased confidence, educational benefits and better relationships within the community.

Cliodhna Mahony, Chair of the NSFPCI, stated “it is our hope that this website will support the long term development of SFP in Ireland, while providing relevant and useful information to agencies and families alike.” Further information can be found at www.sfpcouncilireland.ie .